My final day in Norfolk for this summer saw me spending a couple of hours in Wymondham (pronounced Windum), which is a twelve minute journey on the Cambridge/Ely line from Norwich…

Arrived here around five to ten in the morning…

I took a left turn out of the station, which isn’t advisible if you want the shortest walk to the town centre (use Station Road!), and I found myself taking a long wander along Cemetery Lane, and approaching the town centre via Whitehorse Street and Damgate Street. Mind you, that did take me past this terraced house in Damgate Street that rather appealed to me…

Is this a former butcher’s shop, converted to a residential dwelling? Well, who knows… 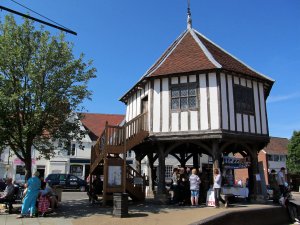 Here is Market Cross, which serves as a Tourist Information Centre, and has a street market adjacent (which is to the left of here)…

The town sign, with the Green Dragon pub beyond…

A closer view of the Green Dragon…

Wymondham is famed for its Abbey, so here are a few pictures of the same…

Wymondham Abbey from the front… 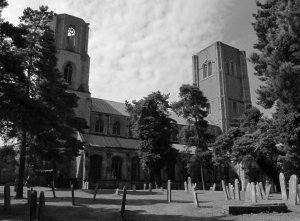 And side-on in moody mono… 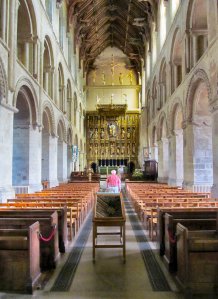 And inside, its glorious nave…

With the town’s main tourist sights now seen, I headed back to the railway station (via Station Road!), arriving there shortly before midday. The 12:14 train back to Norwich was delayed by ten or fifteen minutes, so I had plenty of time to nip into the Station Bistro to buy a very nice cheese scone, and tin of cola…

Back in Norwich, my train to Liverpool Street wasn’t due until half-four, so I wandered around the city, having a lunchtime pint in The Mischief pub, and taking a few final photos of this trip to the city…

Kate had given birth to George on the afternoon of my arrival in Norwich, and the event was celebrated in the window of the Save The Children charity shop in Magdalen Street…

A valedictory view of Norwich, the River Wensum, with my B & B, The Station Hotel in Riverside Road, just visible behind the back of the double-decker bus…