Archive for the tag “Platform 0”

I watched a documentary on the expansion of  King’s Cross station a few weeks ago, and there were some ambivalent reactions from a few of the station staff to some of the changes, but personally I love it, not least because of the inspired architecture that now dominates the concourse there.

And being King’s Cross, of course, it has some some latter-day literary connections, evidenced by the Harry Potter shop in one of the photos below. I also rather like the fact that there’s now a Platform zero/nought, which I guess is pretty unusual in platform numbering schemes in the world’s railway stations…although I could be wrong …;)

I’ve never read a Harry Potter book, nor seen any of the films, so I’m not quite sure why attempts were apparently being made to photograph a bloke jumping into a shopping trolley or similar, but I guess that might be an essential element of the Harry Potter stories… 😉

So here’s Platform 0, with a couple about to board the 7 o’clock train to Newcastle. in the north-east of England… 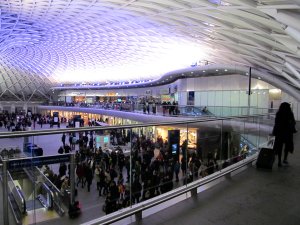