Archive for the tag “Borussia Dortmund”

Some Titchfield flora…and a day in the life…

All the above were taken in the past week in Titchfield in Hampshire, during lunchtime walks to get some fresh air…whereas all of the following were taken today in Portsmouth/Southsea and London. The first is of Guildhall Square in Portsmouth at midday, with the Guildhall being watched over by Queen Victoria…

The next is of a book I bought in the Adelphi second-hand bookshop in Albert Road in Southsea early this afternoon. It cost me two pounds fifty, and is a 1938 reprint of a book originally published in 1937. It is the narrative, with paintings and poetry, of a Chinese artist living in London in the 1930s, recording an expedition to the English Lake District, taken in part to escape the London fogs, and also to reconnect with landscapes reminiscent of his home in China…

The Silent Traveller: A Chinese Artist in Lakeland, by Chiang Yee.

From Albert Road, I wandered down to Canoe Lake on Southsea seafront, aware that a procession of naked cyclists would be making its way from the naturist beach at nearby Eastney, along Southsea seafront and beyond. It was one of a series of World Naked Bike Rides taking place at various venues this summer, and it seemed like an event worth recording for posterity here (That said, I’m being very discreet in tagging these photos, restricting the tags to one only, ‘naturism’ ;)). Anyway, here they are, and if nothing else, it was at least a lovely day for such an event…

So here they come, along the seafront road from Eastney…

Unsurprisingly maybe, there were a minority of women cyclists participating, but there were some brave enough to take part…:)

At nearby Canoe Lake in Southsea, among the attractions is ‘water walking’, a bit of a misnomer, but that’s what it’s called…

And this is what it means… 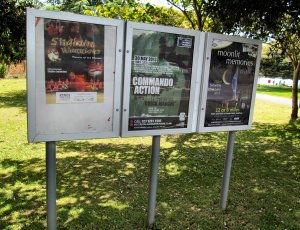 Further attractions in Southsea this summer…

German fans in Trafalgar Square, prior to this evening’s Champions League Final at Wembley…and a great match it was too :)…

Finally, close to home, a couple of pictures taken in Whetstone, London N20… 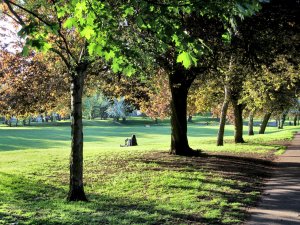 And another of Swan Lane Open Space…