Archive for the category “Scotland”

Journeying across the years…

I spent much of today tidying up my flat in north London, giving a literal meaning to ‘The Way is gained by daily loss…’ ;). Whatever, it meant that I wasn’t much inclined to go out picture-taking today, and I decided instead to indulge myself by uploading some of my favourite photos from bygone years. That’s something that would have definitely been verboten with last year’s photoblog, when it was important to me that the images originated from the within the specific day of the 366 that they were assigned to :).

So here are half a dozen photos taken between 1982 and 2006, all but one of them naturally enough taken with 35mm cameras, and probably all taken on colour slide film, which I subsequently converted to digital images via a Nikon Coolscan film scanner.

The first, second and sixth photos below I’ve downloaded from my flickr account, while the other three I simply uploaded from the hard disk of my PC.

The first was taken ‘on a drizzly Wednesday afternoon’ in 1982, and the bloke with the bird on his head was actually feeding the seagulls at the time. Even so, I think I was fortunate with the combination of elements in this particular shot, and I especially like the two gulls sitting on the wall watching, and perhaps doing the bird equivalent of laughing at what they see before them ;). Incidentally, at that time in the early 1980s, I was working in a factory in south-east London, doing two 15 hour shifts at weekends, then having the rest of the week off, which gave me a great opportunity to do a lot of photography in central London, which I often took advantage of :).

Man with a seagull on his head…

As for the next picture, taken on 23rd July, 1984, I like the inherent paradox of militant vegetarians advocating the slaughter of butchers! I’ve been a vegetarian for around three decades now, but I can’t say I’ve ever had murderous thoughts about butchers ;).

I was born in the county of Kent and this sunset was taken around West Malling, which is the area in which my Mum still lives…the picture probably dates from the 1980s sometime… 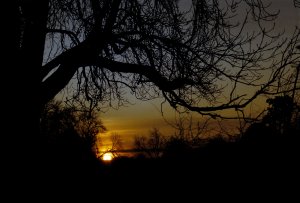 The following photograph dates from the summer solstice of 1992, when I travelled up to Scotland to run my one and only Marathon race, around Loch Rannoch. It took me just under four hours, but I remember it being a lovely June day, and I have fond memories of it all :).

Below is what is now known as The London Eye, but when it was opened on the 31st December 1999, it was still called The Millennium Wheel. There must now be billions of photographs of The London Eye, although very few of them will show it looking quite like this ;).

The Millennium Wheel, being raised to the vertical, in the summer of 1999

Finally, I have spent countless hours on London’s South Bank, and many of them in the Royal Festival Hall, where this photograph was taken on the 9th June, 2007. Xue Fei was playing (exquisitely!) Francisco Tárrega’s ‘Recuerdos de la Alhambra’, which she described that afternoon as her favourite piece of music, and it was just a real privilege to be there to hear her play it :). It was a free concert incidentally, in the Foyer, to celebrate the re-opening of the Royal Festival Hall after a two year closure for renovations. This photograph was taken with a Panasonic Lumix DMC LZ1 digital compact camera (which, ironically, I found today whilst tidying up the flat, and noticed that I’d last used it in 2009 ;)).